The beloved 80's cult classic BEETLEJUICE by Oscar-winning filmmaker Tim Burton is in the inspiration for Murder by Appointment's latest murder mystery parody! You're cordially invited to attend the supernatural wedding of the deceased Mr. BeetleSleuth and the living Ms. Lydia Ditz where you'll join all of your favourite characters from the movie— as well as a ghoulish new addition, the recently deceased Mother BeetleSleuth— as you attempt to solve the murky murders of Barbara and Adam Marshland.

DEATH AT A FUNERAL  by Amber J. Hicks & Rodney Roy ​

​​You are invited to attend the funeral of award-winning adult film star Dirk Swank who passed away tragically on the set of his last movie. The recent recipient of the Golden Phallus Lifetime Achievement Award for his impressive body of work, Mr. Swank is survived by his wife, screen partner, and multiple Cherry Award-winning star, Ms. Kara Hardcore, as well as their daughters, hand model Ivory Swank and cosmetic surgeon Dr. Mahogany Swank. Funeral proceedings will be presided upon by Father Peter Patter and will be held this Sunday at the Church of the Really, Really Late Saints. ​Get ready for hardcore laughs with Murder by Appointment's tongue-in-cheek parody of the adult film industry. COMING SOON!

​​​You are contest winners with exclusive behind-the-scenes access to director Susan Spielberg's latest B-horror movie, CABIN SCREAMER!  Enjoy a meet-and-greet with the stars during cocktails and be a part of rehearsal of the terrifying climax where a masked killer goes on a murderous rampage in a secluded cabin in the woods. When life imitates art, and a cast member turns up dead, it's up to you to you to solve the murder! Join Susan Spielberg, soap opera star turned "Scream Queen" Marlena Waters, "Slasher King" Bob Loblah, leading man Bumperstump Calldispatch, and really off-Broadway star Janis Leigh in this crowd-pleasing spoof of slasher horror movies!

​​Welcome to the 26th annual Golden Glob Awards where we celebrate the year's best entertainment! You'll walk down the red carpet as VIP guests and rub elbows with Hollywood's biggest stars and hottest messes in a scandalous red carpet mystery where every star is a murder suspect. Join Meryl Sheep, Lady Kaka, Mangelina Jolie, Samuel L. Jackass, as well as your host Opera Winfrey and Entertainment Tomorrow's Mary Tart for a sensational evening of glitz, glamour, and back-stabbing murder!

​In this play within a play, director Simone Jowel is in a small town near you and she's auditioning actors to star alongside stage and screen legends Dizzie Taylored and Richard Hurtin in the new Broadway play, DEATH IN A SMALL TOWN. However, when the playwright turns up dead it’s up to the audience to figure out “whodunnit” because the show must go on— and there's a killer in the  audience!

Ms. Grinched, the recently elected Mayor of Greater City of Whosewhoville, which now includes the North Pole, is holding her first potluck Town Hall meeting since taking office where it's rumored she'll announce plans to cancel Christmas! When the meeting takes a sinister turn and Whosewhoville sees its very first murder, it's up to you to solve this Seussian mystery. Was the eggnog perhaps spiked? Or was it that her girdle was just too tight? Did she eat poisoned Green Eggs and Ham? Or was it that somebody just wasn't a fan? Whatever the reason, 'tis the holiday season... for a murder mystery delight!​​​ 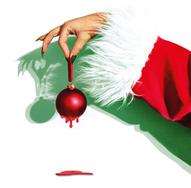